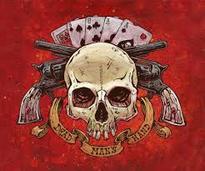 Aces over eights is the most famous poker hand, thanks to Wild Bill Hickok, a "Old West" lawman, gunfighter, folk hero, and avid gambler and his untimely demise. It is in fact considered as the infamous Aces over Eights poker hand at DMH Poker because it is the card hand Hickok held on his death when a he was shot fatally from behind while playing a game of poker, making this card hand also synonymous to the name "Dead Man's Hand". Aces Over is defined as a full house with aces over any pair of cards. In this case, the card hand is actually a two-pair poker hand that consists of two black eights and two black aces. The earliest detailed references of the aces over eights hand as the dead man's hand was in 1886, and although this expression was used quite wildly during the late 1800s and the early 1900s, no one actually connected it to Hickok until the 1920s.

According to legend (or history as some may call it), the hand was picked up from the floor by a man who identified the cards as the "the ace of clubs; ace of diamonds with a heel mark on it; the ace of clubs; the two black eights, and the queen of hearts with a small drop of Hickok's blood on it". Still, others claim that the hand was composed of two black eights, the ace of clubs, and the ace of spades, with the queen of clubs as the fifth card. However, no one really knows what the card hand Hickok died in actually is because no solid source can be found for this exact hand. Prolific gamers nowadays consider aces over eights as two pair aces and eights of the black suits, which is one of the best starting hands in poker . 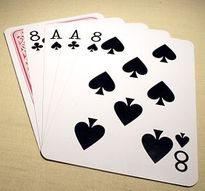 As to the fifth card that makes up the "aces over eights" card, there is still debate on what the actual card is, from the queen of clubs, queen of hearts, and ace of diamonds. However, there are also various claims that Hickok in fact discarded the fifth card and he was in the process of drawing another when it was interrupted by the shot, making the fifth card unknown, as he never actually got the fifth card.

There are currently historical displays in Deadwood where a reconstruction of the saloon where Hickok died can be seen. In this reconstruction, the nine of diamonds is shown as the fifth card.