Learn about Poker in the Wild West and the Preferred Games 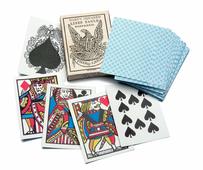 DMH Poker loves a poker story, especially when it comes to the origins of poker. Poker in the Wild West is commonly accepted as a fact much like bread and butter or peaches and cream. While Hold'em is by far the most popular card game in America today, the one that was enjoyed in those days - from 1825 to about 1915, was known as Faro which is still available at some poker rooms for the US. It was based on a traditional 52-card deck and required several players who would place wagers over the course of several rounds.

Of course, like many of the casino games that people enjoy today, poker in the Wild West was introduced through the port city of New Orleans in the mid-1800s. This version used a 20-card deck spread out over four hands containing five each. From there, it made its way onto riverboats which were popular gambling establishments at the time and eventually made its way westward into Vegas and other cities.

People tend to have a misconception when it comes to poker during those years and truly believe that Hold'em was the game of choice. However, this is not the case. There is some documentation leading historians to believe that the concept of sharing cards among a community of people was not introduced until the early- to mid-1900s - long after the Wild West days had seen their glory.

More recently, modern technology has only added to that misconception. "Red Dead Redemption", a video game released exclusively for the Microsoft Xbox console, is a title that focuses on that era with some degree of factual information. However, there is one major error in that people did not participate in Hold'em in saloons as is depicted in that title.

If you really want to make the connection of poker in the Wild West, then remember a game called "Jackpots" that resembled today's Five-Card Stud with a hint of Tens or Better. Iconic figures like Doc Holliday and Billy the Kid likely killed their enemies over this title - not Hold'em like most people believe.