Discover the Basics of Jacks or Better Poker Online 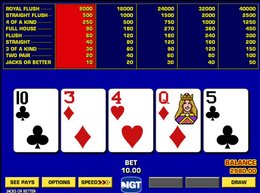 One of the most popular games at Dead Man's Hand is the Jacks or Better video poker game. This video poker variant is also known as Draw Poker which has a similar gameplay with that of five-card draw poker. Players need to complete a hand which has the jack or any better card to win big on this video game machine. There are other card combinations in this game which also reward various payout values. But aside from knowing the main objective of this game, players also need to know and familiarize themselves with how to play Jacks or Better video poker to maximize their played wagers in every game.

Basic Gameplay of Jacks or Better

As mentioned, this game has the same mechanics as that of five-card draw poker. The Jacks or Better rules are comprised of some of the basic video poker strategies and gameplay which will guide amateurs to better understand the game. To start a game, players need to place their desired active wagers to be played on that particular round. They can play with at least one up to five credits in their credit lines. These have varying wager amounts at least 0.25 coins depending on the video poker machine they play in.

Once the wagers are placed, players are dealt with five random cards by the virtual game dealer. They need to select the best hand to start with. They can discard all or none of the starting cards which will be replaced to complete their final hand.

Players will either win corresponding payouts with their final hand combinations or lose all their played wager after this round.

Similar with any other video poker variants, there are various hand combinations available in Jacks or Better which can win players instant payout values. They should complete one of the different poker hands to get rewarded with their equivalent payouts. It also important that they know the high and low cards to look out for in their hands. High cards are composed of the Jack, Queen, King, and Ace; whereas low cards are those in between the 2 and the 10.

Royal flush is considered the highest paying Jacks or Better hand combination. Players should have a five-card hand which are in sequential order and with the similar card suits. The royal flush hand should start with a 10 and ends with a high valued Ace. Meanwhile, the next most rewarding hand belongs to a Straight Flush which has five consecutive cards with the same suits.

Winning Strategies in Jacks or Better 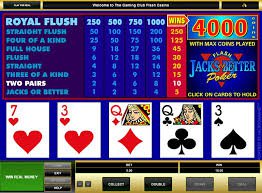 Aside from knowing the basics, it is also important for Jacks or Better gamers to play with the best poker strategy to end up as big winners in this video poker variant. These winning strategies include some of the best guides for novice players to consider when playing this game. These include the following winning tips for them to end up big winners in Jacks or Better:

- Players should remove the fifth card in either their four cards to a royal flush or four cards to straight flush combinations. This increases their chances of getting a better replacement on this discarded card and completing a rewarding hand.

- They should also replace this fifth card whenever they four of a kind combinations.

- Players should keep their combinations of a royal flush, straight flush, full house, flush, and straight as is and don't replace any card on their hands.

There are also guided charts available online which detail different https://www.dmhpoker.com/best-poker-tips.html for Jacks or Better. These include various winning combinations and tips from experienced Jacks or Better players. they may consider these strategy charts to maximize their played wagers in this best online poker game available in the market today.

Players can also play in various online gaming sites which offer free games to its players. They can enhance their skills in this platform which mostly don't require any download and registration from them. Several Jacks or Better games are also available on different mobile platforms for easy gaming anytime and anywhere.